Things that annoy me with itunes and iphone ipod app

Number 1. Metadata is crap. Not just bad. Not just ‘Jonny needs to try harder’ in parts. out and out crap. Even on popular albums. This is the most popular digital music system there is. by far. and they can’t get it right.

When I want to browse albums I want to see albums, not random one-off tracks that so happen to include the album they belonged to (which is often the case from iTunes). Itunes is designed to allow you to buy one track, not whole albums, so why is iTunes designed in such a way that it doesn’t cater for this. Album browse is useless because most of it is random one of tracks.

And like most people, I’m visual. I glance my albums on my bookcase my brain is scanning for the blue/green one for The Avalanches. So the lack of covers for fairly popular albums in annoying. But having the wrong cover  is worse. I’m presuming many are the US release album cover. But here’s the thing… Steve can stand on stage and show some really amazing things, so is it that hard to say this person is buying/ripping an album from a British band, with a UK Itunes account, with a UK credit card, with a UK Mac, through a UK ISP, located in the UK, is it that hard to serve up the cover used in the UK? Really? 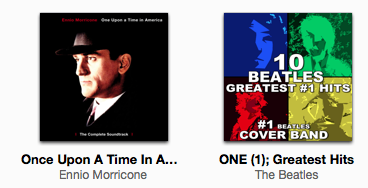 I do not own covers that look like this – and it’s the real Beatles album, not some ‘cover’ version

Ripping/Buying an album and showing as multiple album entries when browsing by album (list or cover flow). This is annoying in iTunes. It’s REALLY annoying on  an iPod. Choose an album, press play, go for a run, discover half the tracks are missing because there’s a featured artist, or the album name is slightly different, or something else which frankly I couldn’t be bothered at the time to investigate but just wanted to, you know, listen to an album.

How the hell has iTunes survived 10 years or so without a bloody ‘add to queue’ option? Winamp had it 15 years a go. When I was in Halls in 1999 we would use a little-known option in winamp so that one computer would stream music and the others would pick up the stream (geeks: may have been multicast), this meant we have 5 or so computers – connected to hi-fis – playing the same music. This made awesome parties, and everyone knew you could browse for MP3s on the main PC and ‘add to queue’ to add to the music without disrupting the flow.

Genres. We’re all subjective. But people. It would just be more accurate to randomly assign genres to tracks than what iTunes currently has. Madness are Rock (Madness!) so are the Pet Shop Boys (madness!), about 80% of my music is ‘Alternative & Punk’, I have about 5 different types of electronic/dance categories, Best of Bowie (Disc 1) is Rock, Best of Bowie (Disc 2) is Pop (but to their credit they managed consistent use of brackets which is a novelty). All in all, this makes Genres completely useless for any practical use – you know, like to listening to music that is vaguely of the same style – except perhaps for classical. And don’t even get me started on classical music metadata. Do we need genres? Does Genius cater for the desire to listen to a certain style of music? How could genres be handled better? Hierarchical? Now that would generate some interesting debates amongst people (WHAT Industry Garage is under Dance, the end is nigh).

The iPod has its own quirks. For one, it insists in showing an artist name even if an album is a compilation. Uncovered by Ministry of Sound is one example of many: 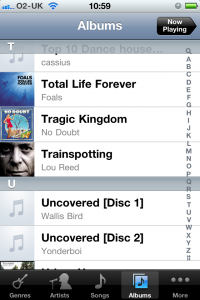 No Yonderboi and Wallis Bird did not create the whole of Uncovered between them.

And which Thriller do we choose here? 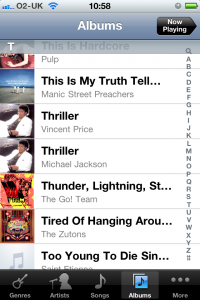 Thriller by Jacko and Vincent – you decide

No points if you foolishly said the second, artist Michael Jackson. That only contains Beat It. Why? It took a lot of looking on iTunes. I tried changing the Genre to the same as the rest of the album (why was it different? they were all ripped from the same CD at the same time). In the end it turned out the rest of the album had ‘part of a compilation’ ticked, Beat it didn’t, so was treated separately. Is it a compilation? Clearly in the real world this is an album by one artist. But some of the bonus tracks are by others (Vincent Jones to name one), does that make it a compilation in iTunes eyes? I shouldn’t have to care.

[at this point I was listening to Brahms, but it’s just reached the end of the current track and stopped. Why? Was it because I had navigated away from the Classical genera and searched for Jackson to write the bit above? Does it only play when it’s on-screen. Tell me why. I thought it would just play.]

Which is another thing. I hate it – and this has happened a few times just writing this stuff – you’re browsing through one part of your collection, but when it moves to the next track it decides to jump back to the track that’s just started to play. To hell with what you were doing. Oh but pathetic end user! Clearly the one thing you want to do when a piece of music starts is leave whatever you are doing and see the entry for the track that is playing now. Of course you can already see that in the bit at the top. But why only see it once, when you can see it in the main list as well. Such joy!

Which is another (another) thing. iTunes is a beast that has grown over the years. It plays music, it manages your devices, it acts like a shop. Sometimes you just want the thing at the top to tell you what’s playing. But no instead, it sits there to tell you your stupidly huge download has not downloaded yet. So which of the meaningless icons means ‘show me what the hell is playing’. I’ll try that one… nope. that exited my careful changes to my iPhone sync configuration with yahoo and has taken me to the song in the main list. User error. Itunes needs tabs, or splitting up in to separate entities. Or something. Trying to juggle shop, config/sync and media centre just doesn’t seem to work.

Only five Karma Collection CDs here. And how did one actually end up showing Various Artists, like so many others should. 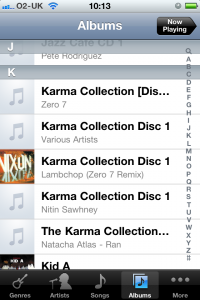 Sometimes. Just sometimes. You, I, she, he, we want to move music files around on our computer. Even without asking Steve first. Call it crazy. In fact it is crazy. You might as well just wipe iTunes now and be damned, you’re going to have to it anyway. You ask too much of it, expecting it to cope with a file moving. It’s entirely reasonable that it will just show duplicates with no easy way to managing it.

And if you add some music to your music folder, don’t think iTunes will do anything as pre-emptive as do anything with it. If you do demand of poor iTunes that it tries to include the new music it will probably re-import everything it already has in that music directory. It might make duplicate files (to keep things tidy) and will probably make duplicate entries. In any case just unless you have a small African nation working to resolve the issue just give up now.

If you buy a new PC don’t ever, ever, ever dream about copying across your playlists. Unless you have a PhD in writing your own XML files. (this isn’t a problem on Macs. But that’s because on OS X you buy a Mac, plug in your timemachine drive and everything Just Works, and somehow Everything includes iTunes – this must hurt the iTunes developers… all their good work).

Oh and don’t think that File > Library > Export Library will do any crazy shit like, you know, exporting your library.

There’s more, but I’m boring myself. This is a flagship product from the company that gets Good Design more than just about any other. Itunes is the Windows Millennium of Apple products. And it’s been like this for bloody years. I mean, will somebody please think of the children.

I have been fighting iTunes for years and a lot of your points about the metadata are spot on. You can though shift an iTunes library from one computer to another provided it is all under the path-to-itunes-library directory and not symlinked elsewhere from within. I have happily shifted my entire library and metadata from mac to pc and back again and it mind bogglingly worked.

Think my pet hate of iTunes is the one of queuing stuff, my work around is use a play list and shift stuff in there and then play from that play list. It isn’t ideal but it works, I would rather right click and select ‘queue’ though.

Hi Paul. Agree the lack of Queue function is super annoying, and your workaround is probably the best substitute.

With migration, I’ve had to do this a few times for others, on PCs and for some reason it’s not just as simple as copying it across, often because of different OS, different usernames, wanting to share library etc. which makes it difficult.
Chris