Tonight is the second party leaders debate. As most in the UK know, Nick Clegg came out of the last one well, using a underhand tactic of using intelligence and good sense to answer the questions. #iagreewithnick immediately became a twitter trending topic.

The upshot of this is that the Lib Dems now have the slight chance that they will come a respectable third in the forthcoming election, instead of just a distant third. Obviously this is a matter of national emergency.

Luckily we have the great British press here to give an impartial view from the side. Especially so close to a general election. They speak the voice of the people. And act as the fourth pillar of democracy.

So on this important day, as the leaders take to the TV studio once again, with the sure knowledge the leaders of the two main parties are well primed in to stop this ‘Nick thing’, the papers are taking a reflective approach… 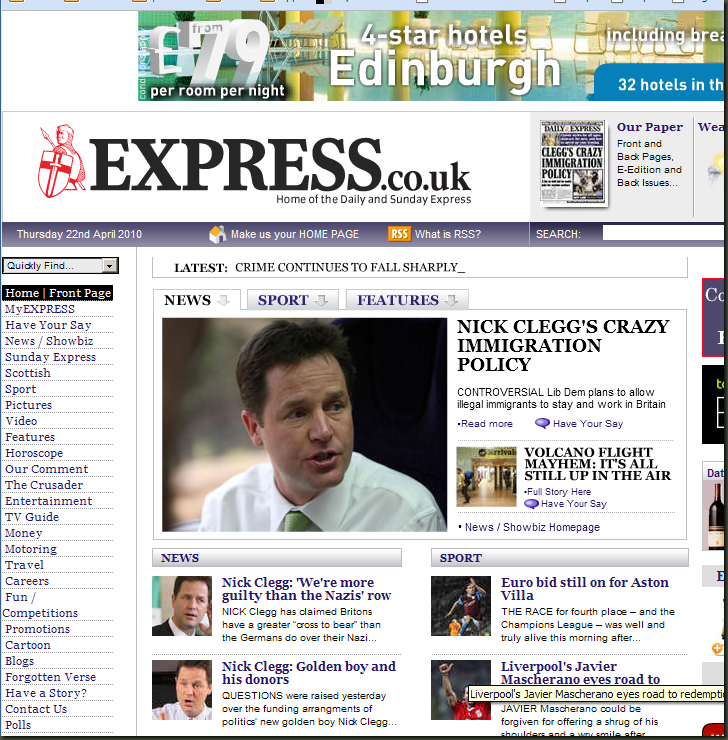 We start with the Express. They tackle the emergency by having the lead story, and the two main News stories dedicated to the serious issue at hand. 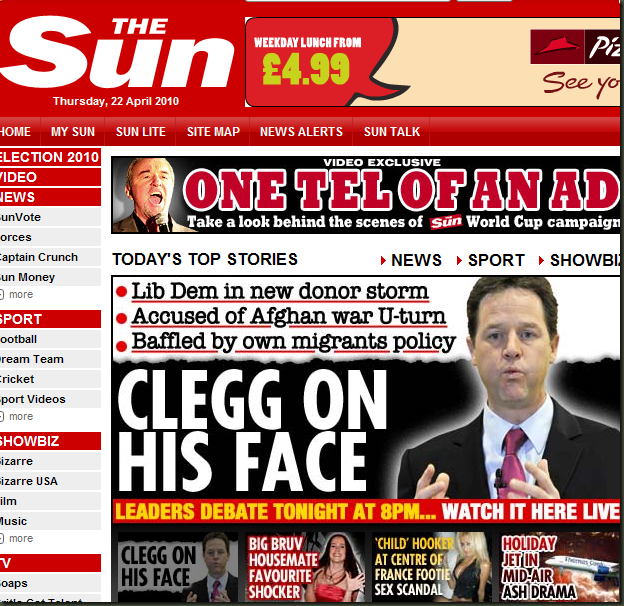 The Sun too decides the Nick of Doom is worth the lead story. They also manage to fit in the time of the debate, a welcome bit of advertising for which ever TV channel is doing it tonight (some company called Sky maybe, they’ll love the free advertising from these editorially independent chaps!). 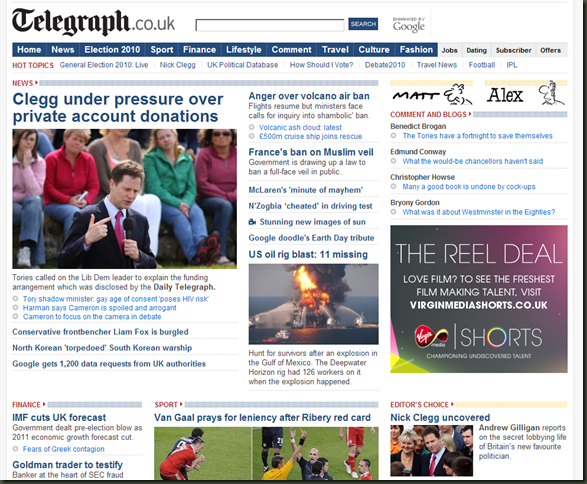 The Telegraph goes for a modest ‘only the lead story’ approach. No. hang on, what’s that on the bottom right there, I see Andrew Gilligan, everyone’s favourite Liberal-left columnist does some important research. And who could have foreseen the timing!

Finally we have the Mail. Actually it looks quite tame for them. Just four articles, well, actually the FIRST four articles on their site, 222 comments and some video. They avoided any sort of emotionally charged piece by bringing up the Nazis and Hitler (but remember he wasn’t all bad).

But then I found a few more, in a novel idea of having more articles further down the page (who’d thought). 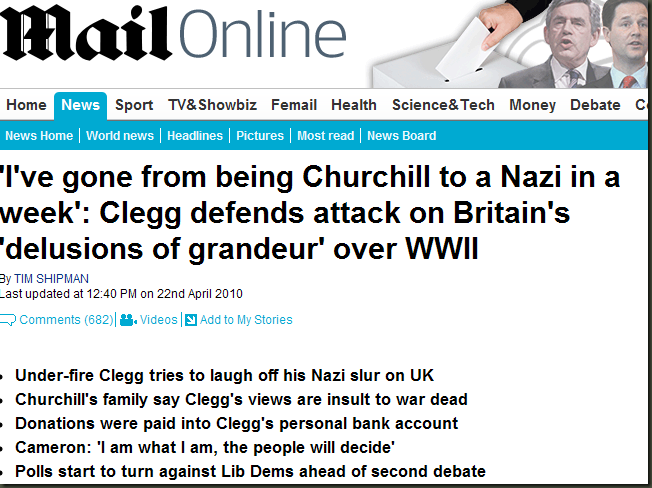 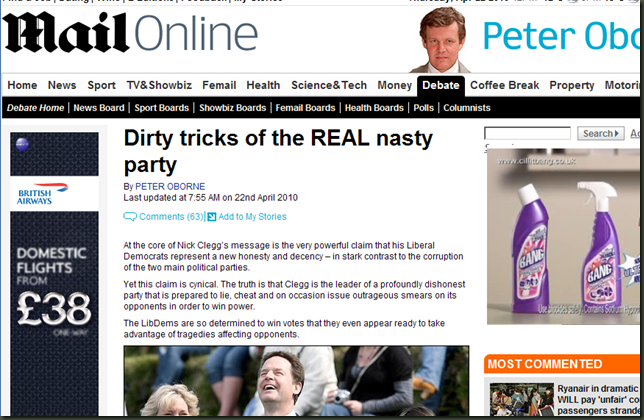 Lib Dems were the evil ones all along. Who Knew????

It’s like the fairground manager from Scooby-Doo all over again. 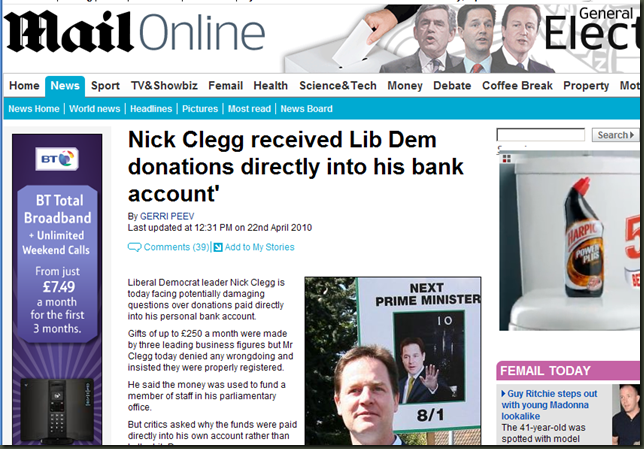 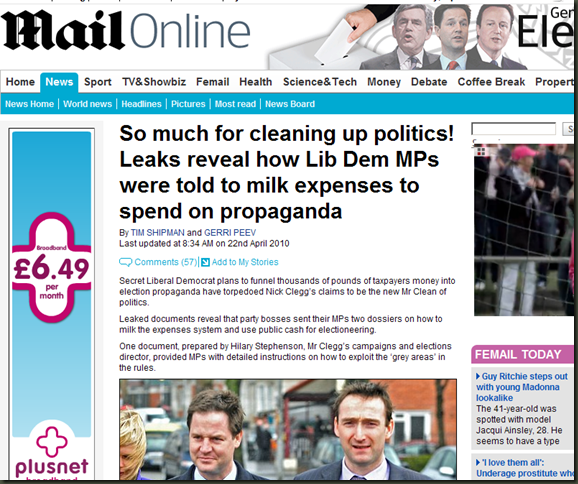 That man on the right looks dodgy (and by dodgy I mean Working Class, obviously). God, can you imagine if the whole of parliament was fiddling their expenses. 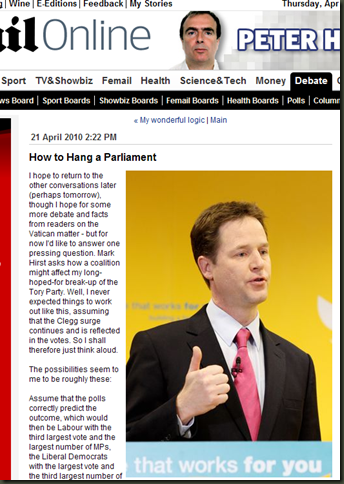 In fairness (members of the press, click here to help sort out your confusion), this is just about a Hung Parliament rather than how evil Nick is. 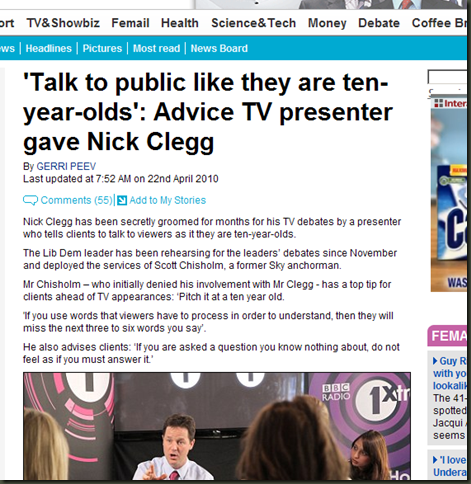 No wonder the public like him. He talks to them like they are idiots. Which of course they are!

So that’s six articles from the Mail, all published today, 22nd (except the blog post, posted yesterday).

It’s not just the press who are alerted to his evils. Twitter too has done its bit: http://www.twapperkeeper.com/hashtag/nickcleggsfault

Finally. Serious bit… If you want decent news about the UK (or, for you crazy liberals, the rest of the world). Subscribe to The Economist, and also read the New York Times Europe section. Maybe we could have papers like that.

In media, politics and current affairs

Excellent post – well done for collating all those stories, and for your rather wry take on it all ;-}