I’ve got the other place (here or here) for random ill-thought musings. But today I decided to put one here. Hi-Fi

I left University in 1999. Having been in full time work before I had even finished my last term, and living in cheap shared accommodation, I could splash out. But being somewhat conservative (small ‘c’, you see that? SMALL ‘C’. I mean ‘c’. Just want us to be clear on this ok) I waited a year, before buying the hi-fi I had seen and desperatly wanted for a massive £280.

Now, should you have been looking at purchasing a stereo/hi-fi (what do we call them nowadays?) around this time, which I was, clearly, then you will be aware at just how vile they all were. Bulging like their biceps were about to explode (pendants will argue about their lack of biceps). The one pictured below is quite a modest example, laziness stopped my from finding a more accurate example. 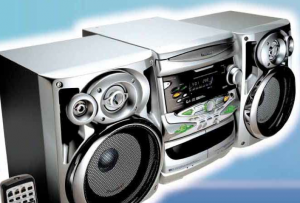 The issue was not was not that these existed, I can understand there is a market for them, just like there is one for JD Sport. But that they dominated the market so. Walk in to a Comet or Currys and aisle after aisle was full of them. If they had 30 models on display then only one would be purchasable by sane persons.

[an aside: it looks like with the demise of (a) vinyl (b) tapes (c) club culture that design has moved on and most hifi’s on sale today have completely different dimensions. A good example is this from Onkyo, which is excellent and recommended]

But I had found one that was above all this, minimalistic in design, always good in my book, and stunning on the glass and wood stand it was displayed on where I first saw it (which was Dixons, yes I know). It was the Pioneer NS-9. 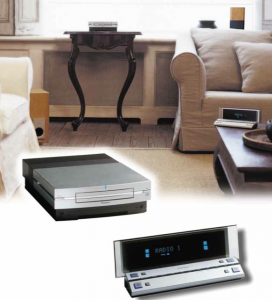 It consisted of one small unit, which was basically the hifi, a separate display, two small speakers and a woofer. It looked and sounded great. The front of the display – with all the buttons – could actually come off and act as a remote but this was more or less unworkable. The UI was awful, trying to set sleep mode or retune a preset radio setting still requires the manual.

The two small speakers and a bass combination was unusual and worked well. My flat mates and near neighbours through the years will attest to the kick arse bass it produced (literally as I type this, Open Up from Leftfield is playing).

It was the first, and still inexcusably very rare, system with FM/RDS I saw that showed not just radio station name but extended information, such as a the show, DJ, and maybe even the song that was playing, depending what the station sent out. This was way before DAB radio, and at the time at most you would normally see was the station name. I must have been one of the few reading the text that was being transmitted. I remember the Radio 1 Top 40 would show the song name and artist (and position in the chart)  which sometimes was displayed before the song was announced on air. It was if I was tapping in to some secret message no one else had access to.

Anyway, apart from the woofer, separate display and extra programme information, it was just a hifi, I still can’t quite believe I’m writing a post about it.

<finally getting around to the point of the post>

But I’m not writing about it.

For years I’ve been glancing an eye at a Hi-Fi separates system. Now isn’t the time for me to be buying one having just bought a property, but I’ve been keeping a look out for something that can replace my stereo. The CD player isn’t what it once was, and a few other niggles remain.

It started when I was a kid. I had a Matsui (Dixon’s home brand, made in Wales I think, but with a reassuring foreign name) cheap hifi. Why would anyone pay anymore than this? I can turn it up and the treble sounds high and the bass is low. It all sounds clear. What more could you want? One day, on a “I need to get out the house on a Saturday but I don’t know what to do so I’ll go to HMV and look at all the albums I could buy, again” I was in, well, HMV and Blue Monday came on. This was a time when HMV was a music shop that sold a few movies in the corner. Their sound system was amazing. I didn’t know what they all did but the black boxes when from floor to ceiling.

The song blew me away. Consumed me. Took me over. And I had it at home! I walked back to my parents house and put it straight on. It didn’t give me the same feeling. That was when I realised what a good sound system could do. And though the sound my system made sounded ‘ok’ it just didn’t have that magic. It sounded flat.

But how often do I use the CD player now? Not enough. Spotify more than anything dominates now. This isn’t always healthy. I can never settle on just playing an album, and spend forever playing favourite tracks. Anything that doesn’t grab my attention is skipped. And I know this is bad.

With audiophiles preaching about the importance of cable, good source, good amp, etc, this all goes to pot when your source is a live streaming free Spotify (subscribers get higher bit rate) going through your Macbook Pro headphone socket. So here’s the question. In this age of Spotify and similar, is the hi-fi stack still valid? I use my Hi-fi more for radio then I do CDs, yet the radio turner is often seen as an afterthought. And what about all in one compact systems, from good names such as Onyko, Cambridge Audio, Denon, Marantz, are separates really that much better than these?

One issue was the tuner, CD players and Amps start at around £100 (though it’s made clear these are bottom of the range). The cheapest tuner is £150, and that has bad reviews, and can’t do DAB+ (DAB+ is a major improvement over DAB, not man realise that the iplayer has a higher quality stream than DAB, with the possible exception of Radio 3). This is an odd situation. You can buy a decent all-in-one unit for say £200, yet a semi-decent turner separate costs about the same, but with probably less features. With the tuner on top of the CD and Amp you’re look at £350 for the most basic of basic systems, extra for the speakers. Is it worth it? How much of that expense goes on the physically boxes and extra overheads of a separates system? The reviews all make somewhat patronising comments ‘excellent sound – for a all-in-one system’, ‘good if you need a basic set in another room’ etc. But how much is snobbishness and how much is fact. Is it worth it?

So I can’t afford a new system. And not even sure I need one based on most of my listening is of Spotify, iplayer and radio 4. But I can’t decide that if I were buying a new system, which I’m not, whether I would buy an all-in-one system (such as this or this) or separates.

I’ll continue to debate what I wont be buying, but might buy if I could afford it, and update you if need be. But I still am not sure such things are needed especially as we move towards the internet/computer being the key source of music, and the main output of which is currently a crappy tiny headphone socket. If we want to hear good quality music via our computer a different route my need to be developed.

In me me me, technology

That’s a coincidence. I have the exact same Pioneer set! I even have the accompanying cassette unit. And I am also having similar thoughts about buying something new.

Lukas, wow. that is coincidence! Did you find the remote useless? I had the tape unit, but as I now never really use tapes, I have not reconnected it after moving.